Sotaiho is a modern body therapeutic system developed by the Japanese physician Dr. Keizo Hashimoto. Main point is the idea that the body could be restored by emphasizing the pleasant movement.

Sotaiho is also a manual-medical method that Dr. Hashimoto developed from traditional oriental healing arts. Untwisting muscular holding patterns, it is a method of neuro-muscular restructuring in the body.

When Dr. Hashimoto began with his practical activity as a physician, he had to find out that the learned methods partly brought unsatisfying results, especially in case of shoulder- / neckpain and loins complaints.

One day he noted with some patients an improvement, after they were in treatment with an acupuncturist or a manual therapist. So he began to examine each of his patients on their build: He recognized that the method of the backward motion treatment, discovered by Michio Takahashi in the 1920s, achieved good results. 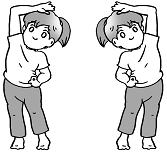 The construction of the body

Dr. Hashimoto recognized that the organism always moves as a unity and formulated from it “the law of reciprocity” (“Doji-sokan-sohosei”).

The construction of the human body resembles in principle that of a house. Four supporting piers correspond to our arms and legs, the ridge corresponds to the spinal column.
If the balance one of these pillars is disturbed sensitively, this will become apparent as a malfunction in the backbone.

This has to do with the fact that we appropriate movement habits since earliest infancy which will be finally pulled, through the whole life. On the other hand tense organs can cause by reflex an imbalance in the trunk musculature as well.

The following regularity can be derived from here: If a part of a chain is impaired in its function, the whole movement chain will be impaired! If one wants to reach lasting improvement of a symptom, the root – that is the dysbalanced supporting pier – must be treated.

Without pain returning back to center

Dr. Hashimoto developed Sotai in the 30s of the previous century. With this simple method the affected person succeeds without pain in restoring the mobility of the spinal column.

By using aimed movements going exclusively to the pleasant direction tenseness could be solved lastingly. This coupled to exhalation and sudden relaxation will shift tension from the outside to the axis of the trunk, reinforcing natural regenerating power.

Dr. Hashimoto named this principle reverse motion treatment; later it was also named the technique of sudden relaxation. Finally, the notion Sotai, a reversal of the notion Taiso – gymnastics, established itself.